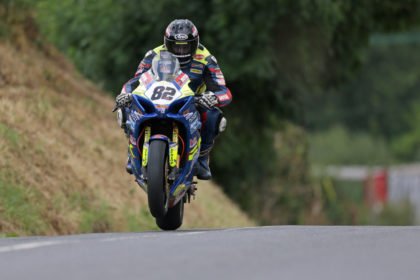 Derek Sheils showed his dominance yet again in the penultimate round of the Irish National Road Racing Championship this weekend, notching up another double at the Munster 100 Road Races – the County Cork event returning to the calendar this year after a five-year break.

Mother nature however wasn’t on the side of the organisers for the return of the event with heavy rain throughout the weekend making conditions less than favourable.

Saturday’s qualifying was downgraded to untimed practice due to the wet conditions. Sunday’s program was also rescheduled in anticipation of the inclement weather hitting the south of Ireland venue.

Having won seven races from seven starts at the National Races so far this year – his only defeat being at last week’s Armoy races when he lost out to Michael Dunlop – Sheils had to start as favourite this weekend.

In the open race Sheils led from the start closely pursued by his only real challenger, Skerries man Michael Sweeney. But in the second half of the race Sheils found that extra little bit edging ahead of the Martin Jones Racing BMW , the deficit at the chequered flag being 4.141 seconds with Thomas Maxwell third just over 18 seconds behind the leading duo.

Ray Casey finished fourth on corrected time with Stephen Casey completing the top five. The points bagged by Sheils earning him the Irish National Road Racing Superbike Championship to add to the Ulster Championship he secured last weekend at Armoy.

In the re-run six-lap Grand Final it was Sweeney who set the pace with race one winner Sheils in close contention. Midway, Sheils hit the front and managed to open a slight gap on the hard-charging Sweeney. Sheils held his nerve and completed his double Superbike win crossing the line 1.7 seconds ahead of Sweeney, Ray Casey took the final podium spot in third, Derek Wilson fourth and Stephen Casey fifth.

Sheils was a non-starter in the Supersport race which Sweeney won comfortably by a fraction over nine seconds. Early Leader Darryl Tweed retired while at the front, Stephen Casey taking advantage of this took second and Paul Fallon was third.

Sweeney added to his Supersport victory with a win in the Supertwin race with a similar margin of more than nine seconds, Tweed was second with Vinny Brennan third.

Dermot Cleary maintained his winning ways with back to back wins in the Senior Support race holding off Tommy Henry and taking a narrow victory by just 0.326 seconds, John O’Donovan was third.

Brennan dominated the Junior Support race taking the win by 3.6 seconds ahead of John Ella and Anthony Lillis finished in third.

David Howard thrashed the opposition in the Lightweight Supersport race winning by a massive 39.898 seconds. Sean Leonard was the only entry in the 125 class.

Sheils’ main contender in the championship Derek McGee was absent from this weekends racing and has already said he is to sit out this week’s Ulster Grand Prix as he feels he is still not one hundred per cent fit after his crash at the TT.

Sheils will be hoping his recent run of good fortune in the national races will carry on into this week’s international meeting at Dundrod. 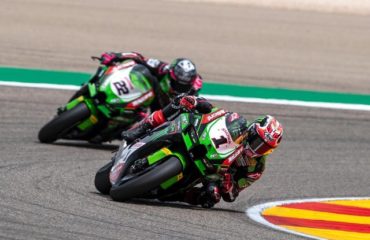 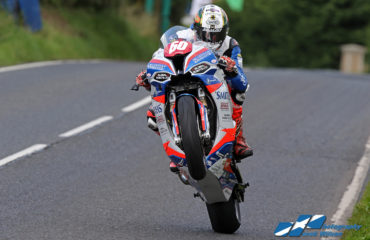 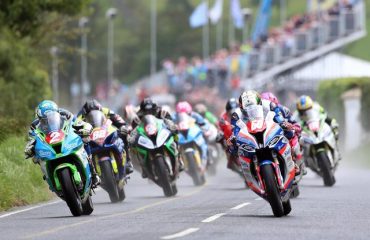