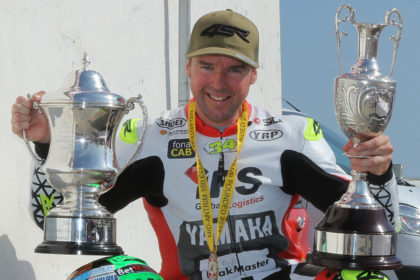 ALASTAIR Seeley set the tone for the rest of the Ulster SBK championship as he dominated today’s Neil and Donny Robinson Memorial races.
Following his clean sweep yesterday at Bishopscourt, the Wee Wizard controlled the action again today as large crowd basked in the second day of sunshine.

Seeley put on another masterclass, winning another four races to add to his two victories yesterday and put himself comfortably ahead in the USBK Championship standings, using his experience to bag wins in both the Superbike races as well as a double in the Supersport races which included the two feature scraps for the Neil and Donny Robinson Trophies. In Supersport race one, Seeley opened his account with an unhindered performance and flag-to-flag win, taking the chequered flag 3.794sec ahead of Michael Dunlop with Mike Browne a further 11.5sec behind and 600cc rookie Cameron Dawson putting in another strong performance in fourth.

For the day’s opening Superbike race it was once again Seeley who set the pace with Ali Kirk in hot pursuit, but by lap eight Kirk slipped off, promoting Jason Lynn into the runner up spot before a multi-bike crash on lap 10 brought out red flags as the result declared Seeley’s IFS Yamaha R1M first, Lynn’s JMcC Racing Suzuki second and Aaron Armstrong’s Honky Dories Suzukithird. Gary McCoy and Michael Sweeney completed the top five.

In the first of the two feature races, the Donny Robinson Memorial, Seeley took to the front from the start with a lead he never relinquished as he took the win, this time by a larger margin of 8.345sec again ahead of Dunlop in second, Browne in third, former British 125 champ Christian Elkin fourth and youngster Dawson in fifth. The Carrickfergus man was on a roll for the Neil Robinson Memorial, with multi-time former Suersport champ Lynn for company as they jostled for the lead off the line, but the challenge was short lived when Lynn tucked the front of his JMcC Suzuki at turn two and slid off unhurt.

From then on it was a procession as Seeley’s lead increased lap on lap, eventually taking the flag 13.458sec ahead of Jonny Campbell, in only his second outing on a superbike, as Sweeney was third ahead of Armstrong and Thomas O’Grady in fifth.

Teen Dawson put in an impressive performance elsewhere, winning both of the Supersport Cup races, and was also untouchable in the Supersport 300 races where he had two dominant wins of 19 and 16sec ahead of his nearest rival.

In the absence of yesterday’s Supertwin winner Adam Mclean and the McAdoo Kawasaki squad, Sweeney stepped up to the mark to win both outings with McCoy and Dave Butler second and third in both.

Andrew Brady made it three out of three in the Pre-Injection class, while road racers Browne and Darryl Tweed shared the honours in the MOTO 3/Lightweight Supersport/250 races. 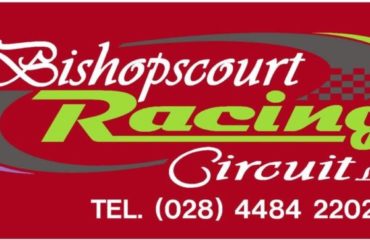