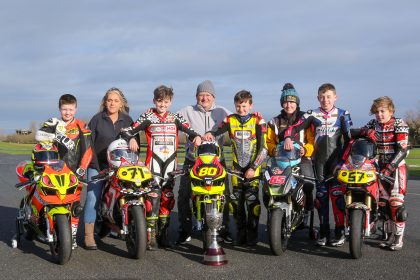 One of the most prestigious trophies awarded in Irish Motorcycle racing, The Neil Robinson Trophy, has been revived!.

This Trophy has been presented to the organizers of the increasingly popular Irish Minibike Championship (IMC) series.

‘Humbled’. How the organisers at the Irish Minibike Championship describe their reaction to the donation of the original Neil Robinson Memorial Trophy to their thriving Junior Mini GP Championship.

“I was the Chairman of the 90 Club which supported Neil Robinson during his short illustrious career. The Neil Robinson Trophy has been used by various Short Circuit promoting clubs at events throughout the years. Past winners include Joey Dunlop, Carl Fogarty, Ali Kirk, and Alastair Seeley. The Mid-Antrim Club has been hosting the feature race for the past few years but I felt a change of direction was needed. My feelings are to support the youth entering our sport with the intention and hope of keeping the memory of Smutty alive.”

“This is a very humbling, yet exciting reward for The IMC. We have worked extremely hard over the past few years to build a Championship dedicated to providing opportunity. Whilst we cater for everyone that forms part of our family paddock, the potential that is evolving from our Junior Classes is clear to see. This talent must be nurtured and encouraged and there can be no greater affirmation than being acknowledged by those behind the Neil Robinson Trophy.

As much as we are honoured to reinvent the award we are conscious of the history and prestige such an award carries and will endeavour to do so with the utmost respect.

The achievements and promises of Neil Robinson are legendary among the motorcycling fraternity. We will ensure that our Juniors understand what an honour it is to receive this offering and will use it to reinforce their drive to fulfill their individual aspirations.”

Neil ‘Smutty’ Robinson, from Cullybackey, Ballymena, was on the threshold of a promising international career when he tragically lost his life at the age of 24 during a practice session at Olivers Mount, Scarborough in 1986. Neil was exceptional. A talented and fearless racer on both circuits and roads. Robinson commanded many sensational victories including the 1983 British 250cc Championship, the 1986 Ulster Grand Prix Formula 1 Race, and the 1986 TT Formula 1 Race which he took with a commanding lead.

Throughout the 2022 Junior Mini GP Championship, points scored in the 3rd race of each of the 11 rounds will correlate to a stand-alone Championship Table. This separate table will take the title of the Neil Robinson Memorial. The prestigious trophy will be awarded to the rider who stands at the top of this table at the end of the 2022 season.

Custodian Trevor Armstrong will be on hand at the end of season Awards Evening to present it, together with a Prize Fund of £500 which will be shared between the top 3 riders. 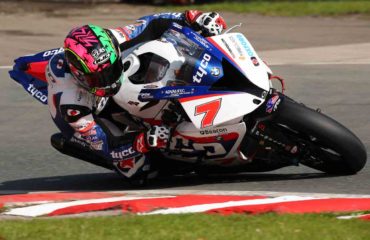 Michael Laverty returns to the TYCO BMW squad for 2018 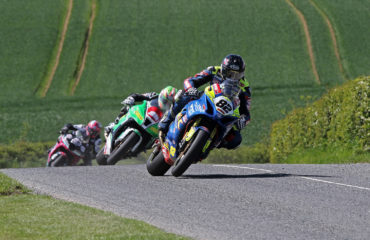 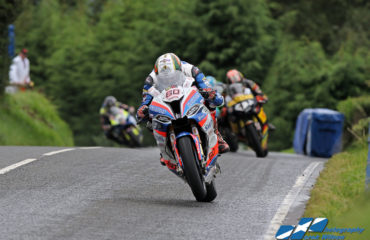