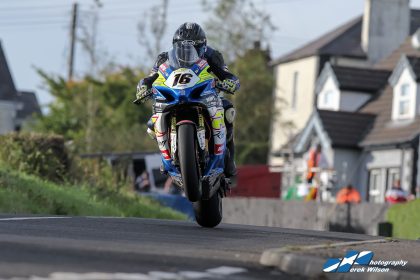 The final Irish road race of the year will go ahead as planned after the organisers decided not to cancel the event following the death of Queen Elizabeth II.

Cork man Browne, who toasted his first win around the Isle of Man TT Mountain Course in the Lightweight 250 Manx GP at the end of August, put the Burrows Engineering/RK Racing Suzuki GSX-R1000 on pole by four-tenths-of-a-second from Michael Sweeney (Martin Jones Racing BMW). Browne’s fastest lap was 111.018mph.

Browne is making his debut at the 3.5-mile Clough course and continued the rich vein of form he has shown after recovering from two broken ankles sustained in a crash at the beginning of the season at the Cookstown 100, which ruled him out of the Tandragee 100 and North West 200.

Graham Kennedy from Wexford slotted into third on his BMW ahead of Ballymoney’s Darryl Tweed, who is riding a 600cc Honda after the Wilson Craig Racing Team withdrew from the Irish road race as a mark of respect to the Queen.

In the Supersport class, Sweeney headed the time sheets on his Yamaha by just over a tenth-of-a-second from Browne, with Kennedy again third in a Yamaha one-two-three. Tweed was fourth quickest followed by Thompson and Darryl Anderson (DK Racing Kawasaki).

The Irish Supersport title will be decided on Saturday, with Browne in the driving seat for the Burrows team. He holds a 14-point advantage over Sweeney, who has already sewn up the Superbike and Supertwin championships. Michael Sweeney claimed pole position in the Supersport class on his Yamaha at the Mid-Antrim 150.

Sweeney was out on his own in Supertwin qualifying on the KBS Kawasaki, securing pole by four seconds from Kris Duncan (Turriff Caravan Centre Aprilia).

Keelim Ryan and Marcus Simpson were fastest in the Senior and Junior Support sessions respectively, with Ryan also leading the way in the Lightweight Supersport/250GP class on the Faraldo Racing Yamaha 450 from Jonathan Watt (Woolsey Concrete Kawasaki 400).

Andy Hornby and Barry Davison set the pace in the Senior and Junior Classics.

Roads close on Saturday from 7am until no later than 7pm. A total of nine races are scheduled. 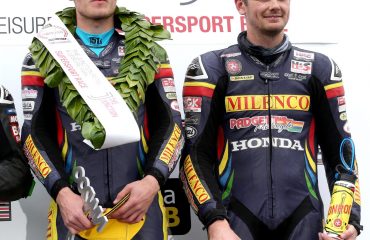 All the winners from the 2019 Irish Motorbike Awards in Belfast 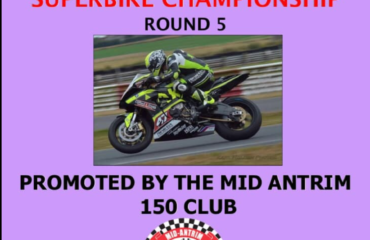