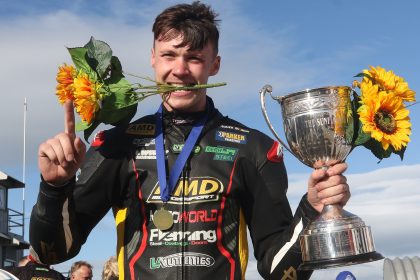 Richard Kerr produced a dominant performance to win the 45th Sunflower Trophy race at Bishopscourt in Co Down for the first time on Saturday to complete a treble.The County Donegal rider led throughout the 10-lap blue riband race to secure the prestigious silverware and £1,500 top prize from Ulster Superbike champion Alastair Seeley. Kerr, who won twice this season in the National Superstock 1000 Championship on the AMD Motorsport Honda and finished fifth in the standings overall, joins a glittering list of past winners of the famous trophy, which includes Joey Dunlop, Steve Hislop and Jonathan Rea. Lining up from second place on the grid alongside pole man Seeley, Kerr took the lead on the first lap and never looked back.
He was 1.5s ahead of Seeley after three laps and extended his advantage to a comfortable 2.4s at the half-way mark in the race.

With clear track ahead of him on a sunny but breezy day at Bishopscourt, Kerr refused to ease off the throttle and continued to stretch his advantage, winning in the end by 6.2s.

Seeley was on his own in second place on the IFS Yamaha R1, 7.6s ahead of Jason Lynn (J McC Roofing Kawasaki).

Jonny Campbell finished fourth on the BPE Yamaha ahead of Eunan McGlinchey on the 600 McAdoo Kawasaki, who was only 0.2s behind.

Simon Reid rounded out the top six on the Start Solar Honda Fireblade.

The Sunflower race was cut from 12 laps to 10 after being restarted following a non-serious red flag stoppage.

Kerr followed up his victory in the wet on Friday over McGlinchey with victory in Saturday’s opening Superbike race, which he won by four seconds from Seeley with Lynn sealing the last rostrum place.

Seeley’s chances were thwarted when he ran onto the grass before re-joining the track.

Nottingham’s Richard Cooper triumphed in the first Supersport race on the BPE Yamaha by Russell Racing, taking the win by 3.5s from McGlinchey with Sam Laffins third on his Kawasaki. Seeley finished fourth. Cooper sealed a double with victory in race two by eight seconds over McGlinchey.

Korie McGreevy was third on the Century Racing Yamaha ahead of Seeley, with Adam McLean (McLean Racing Yamaha) and Jonny Campbell (Magic Bullet Yamaha) rounding out the top six.

Ian Hutchinson was 10th on the second of the BPE Yamaha by Russell Racing Yamaha machines while 21-time Isle of Man TT winner Michael Dunlop was 13th riding a McAdoo Kawasaki.

A frenetic first Supertwin win race went to McGlinchey on the McAdoo Kawasaki after a race-long battle with Cooper (J McC Roofing/KMR Kawasaki). McGlinchey got the verdict by three hundredths of a second on the line, but Cooper was later awarded the win following an appeal.

Cooper also won the second Supertwin race for the Junior Sunflower Trophy title by 11 seconds from Gary McCoy on the Madbros KMR Kawasaki to complete a four-timer.

Carl Phillips (McKnight Suzuki) completed the top three on the podium, misssing out on the runner-up spot by only 0.350s.

Race one winner McGlinchey was a non-starter along with Laffins, who was also due to ride a McAdoo Kawasaki. 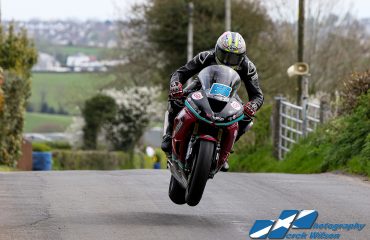